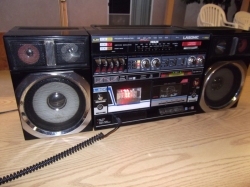 
2 replies to this topic

I recently picked up a PC-W300 the other day at the Swap Meet and which it sounds great when it comes to FM and Aux, the tape decks are dead in the water. It really isn't that big of a deal because I don't really play any tapes, just iPod it up....but I was hoping if anyone had some experience with it.

From what I can tell the play button is jammed in the engaged position and it won't release fully when you hit stop...would this cause the motors to not work? Anyways I've seen a few people who have had these things have similar issues so I was hoping someone might know. If not, I might just put it up on eBay and see what I can get for it, unless someone is interested here? It's a clean box, with good sound, but a lack of VU meters and any sort of major lights is kind of a disappointment.

If the belt broke or began to slip during the play session -- I believe this model will not disengage. You need to open it up and check the belts. If loose, or missing, then they need to be replaced. FYI, This is not an easy boombox to rebelt.

Yeah Super, I checked it out when I had it open cleaning it out and it seemed like there was a lot going on with the tape decks with all of the features they had built in...at this point part of me is considering selling the thing or trading it for something different.

Do you know of any manual for this thing? I checked online and the Boomboxery manuals for it, and I really couldn't find anything.

Back to JVC / Victor
Reply to quoted posts     Clear