13 replies to this topic

The deck was unresponsive despite all 3 belts being good. I noticed that the main gear was not rotating which can be seen here underneath the flywheel to the right (black gear). 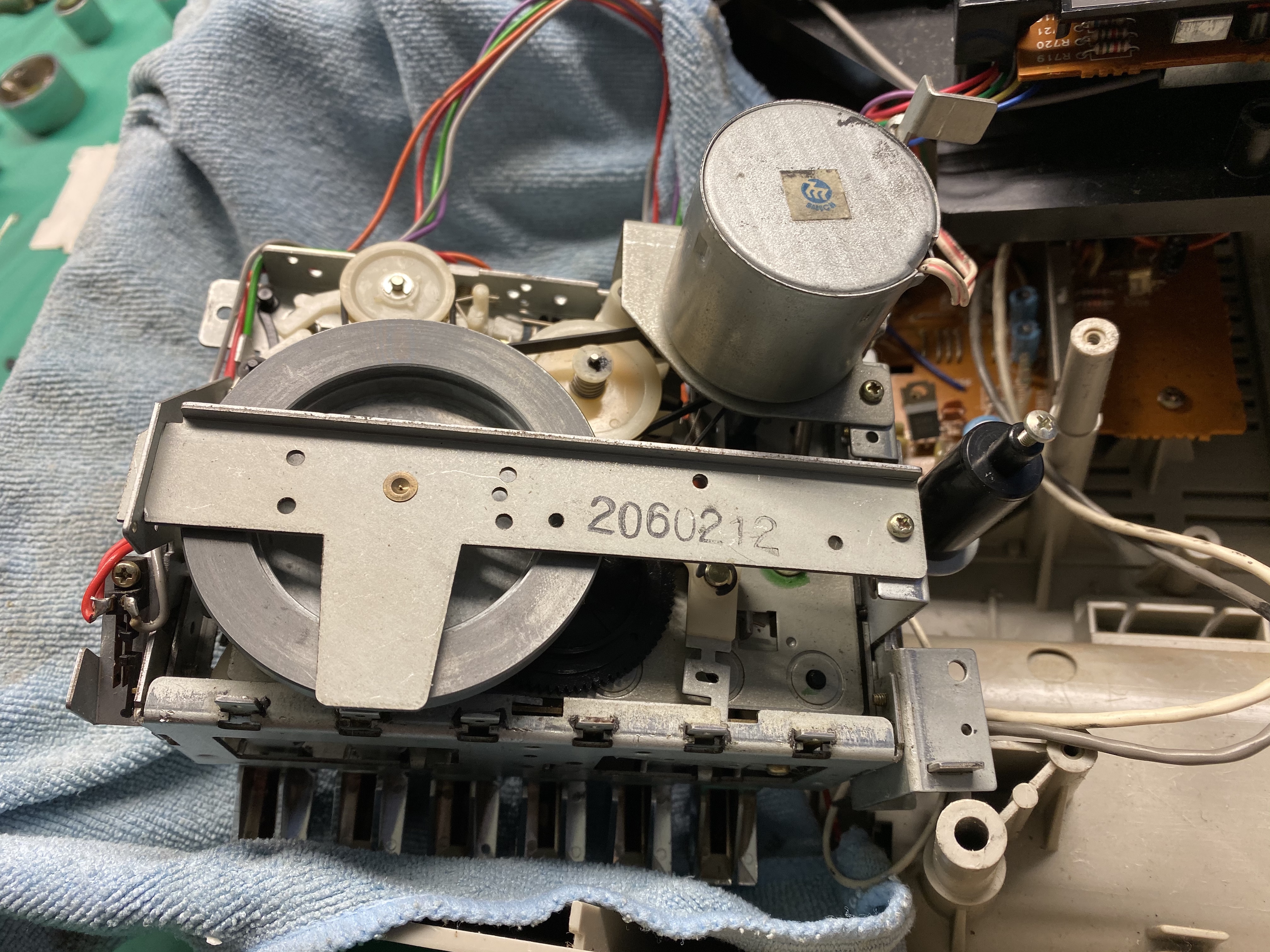 I decided to photograph the stages for getting deep into the deck where the main gear pivot post is (which is made of black plastic) to try and see if there was a reason why it was a little loose and causing the gear to not engage as it should. 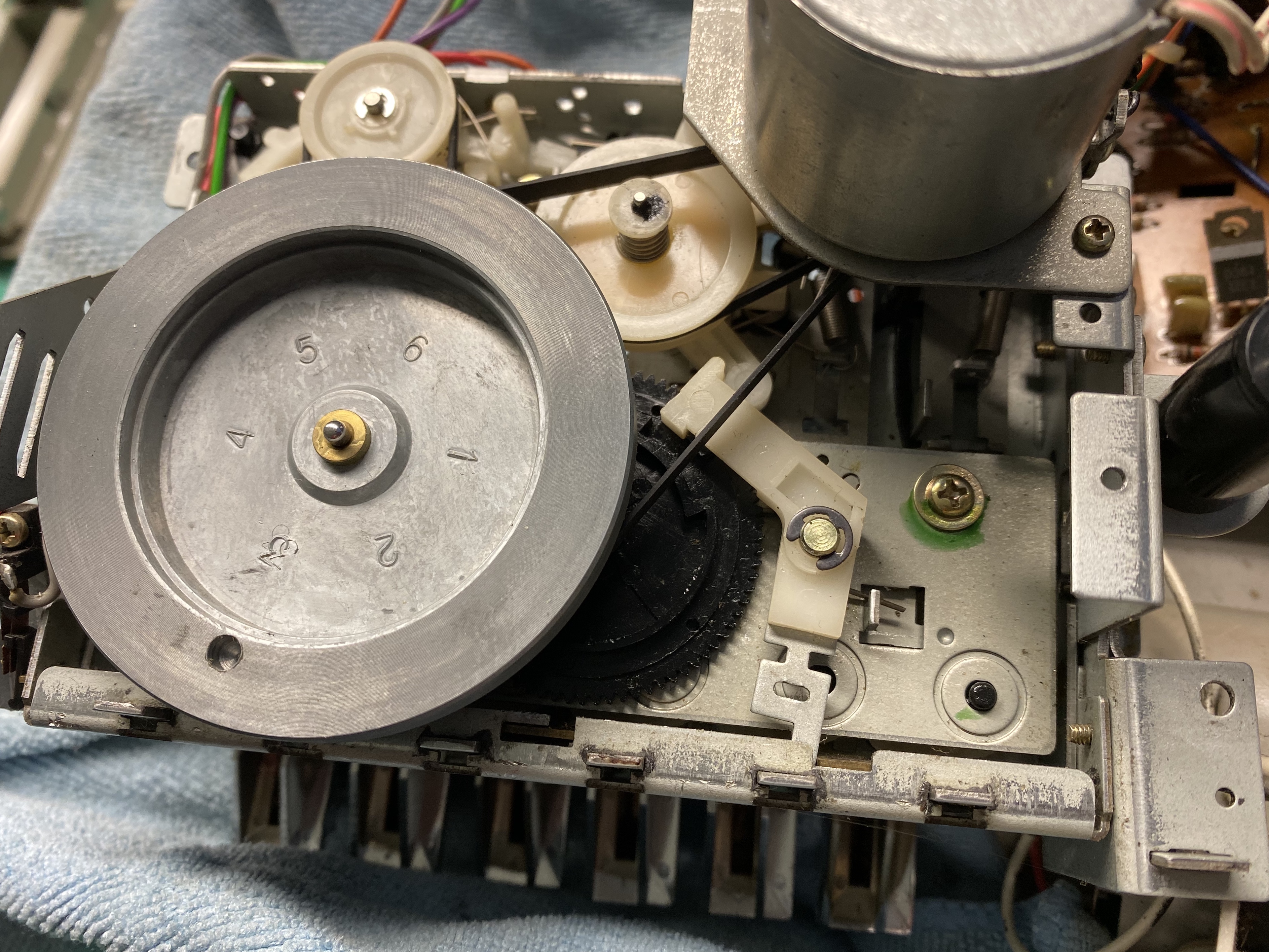 2. Here is the main gear after removing the flywheel. There is a spring with the flywheel along with a gear which slots into it. 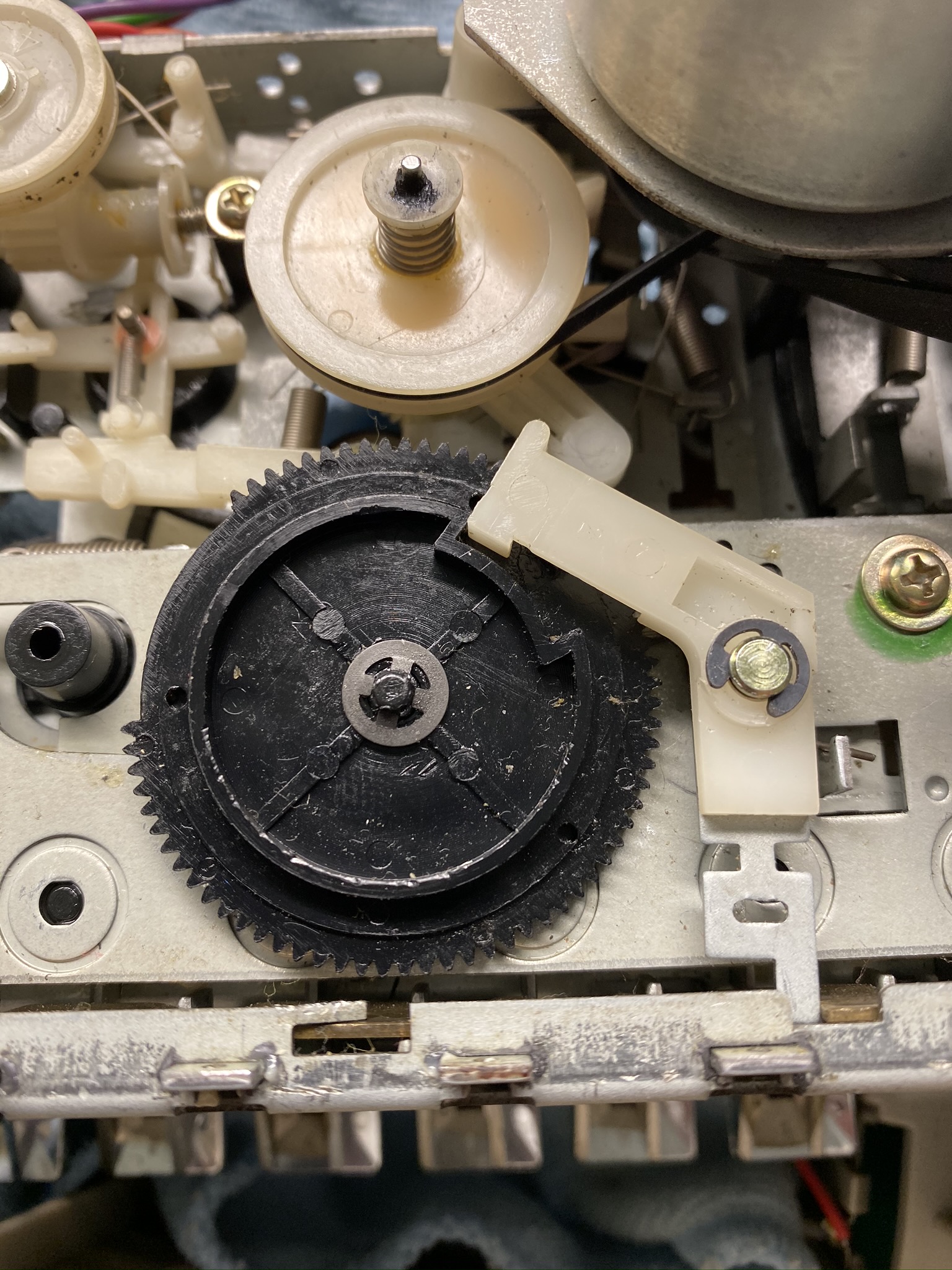 3. With removal of the gear and the lever next to it you can see the a spring revealed underneath the lever against the top of the main gear pivot in the image below. 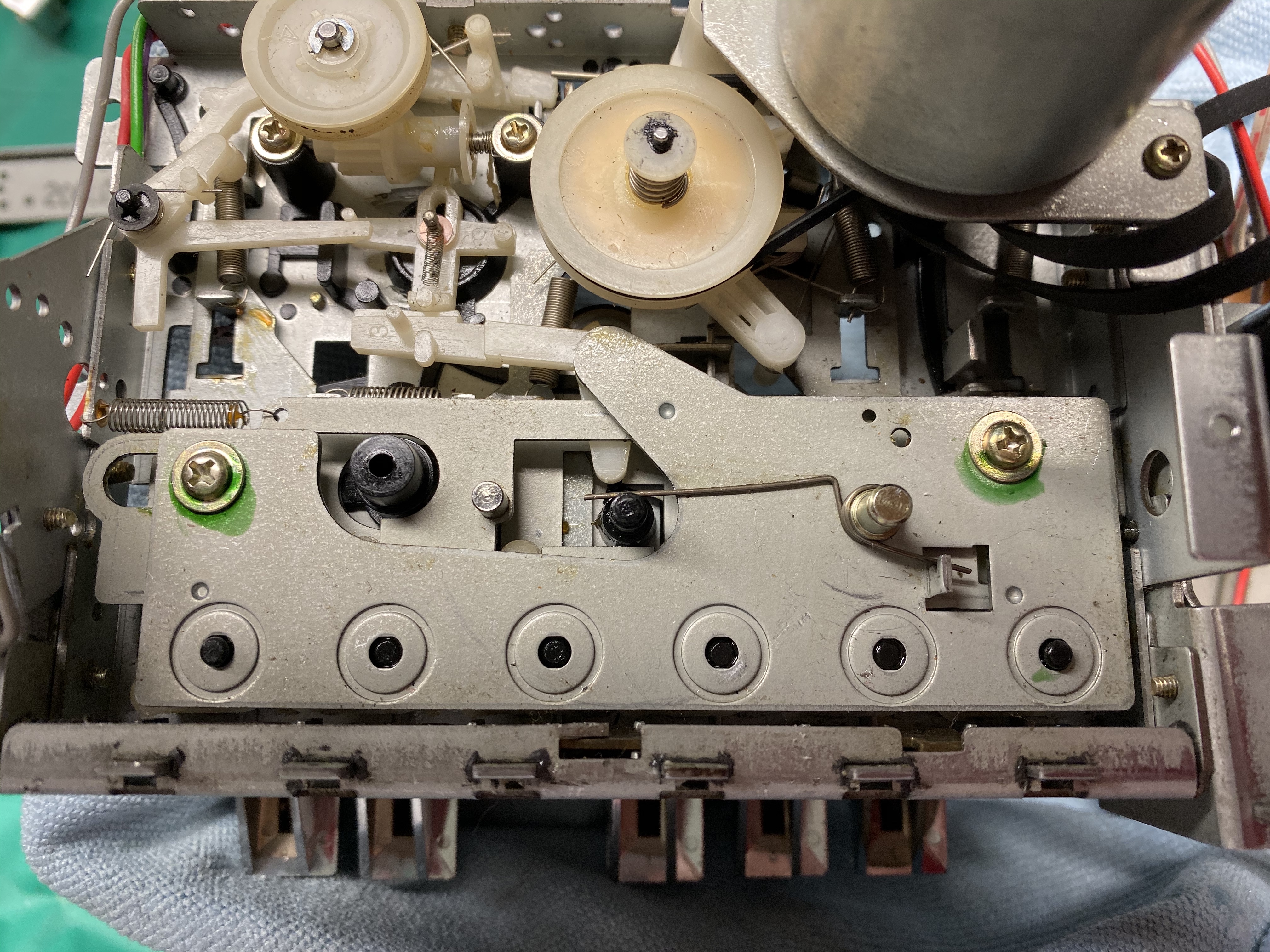 4. Remove the two screws to remove the top plate being careful with the springs which are underneath. 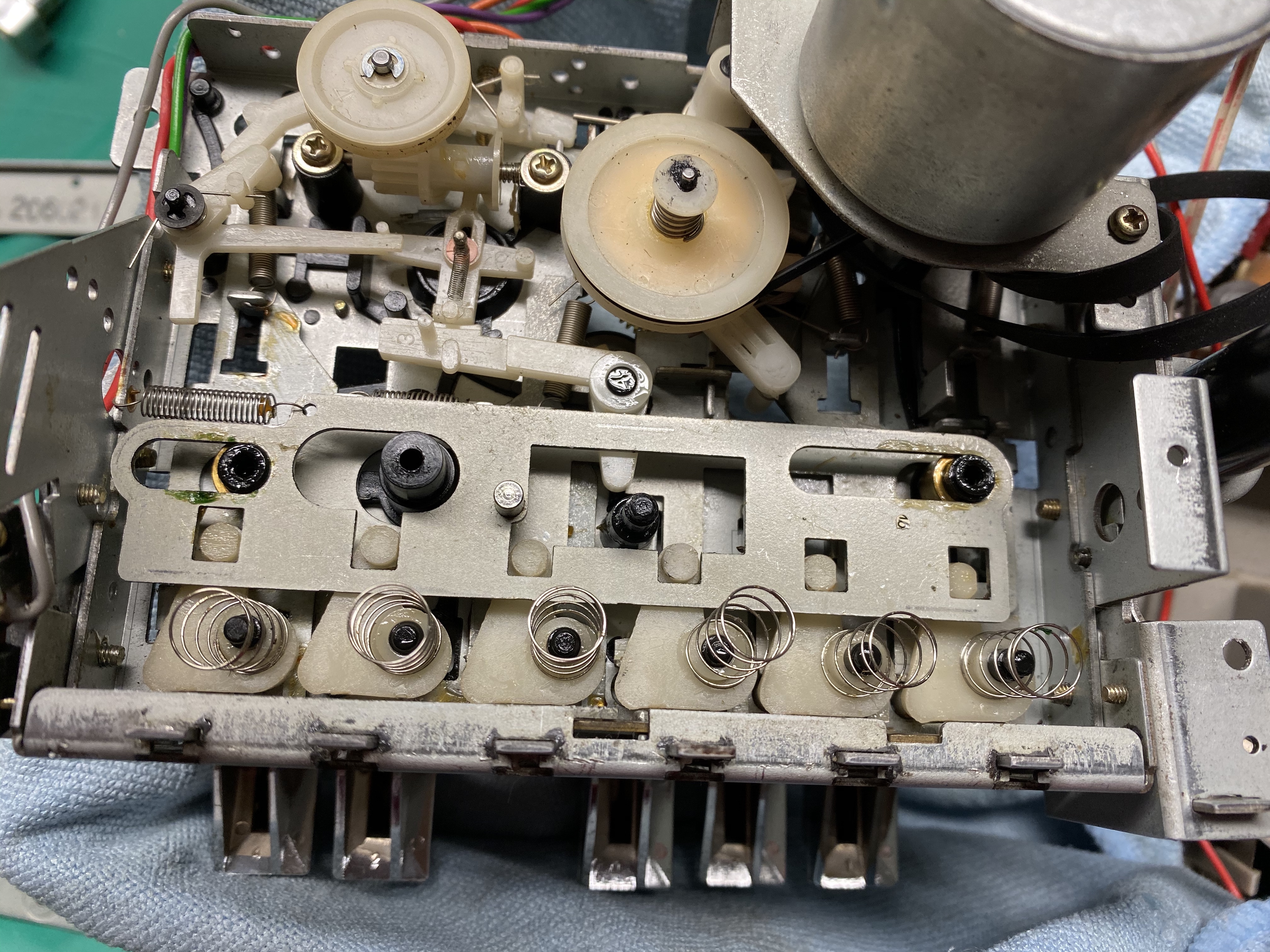 5. Here is the main gear pivot, a few springs have been removed, you need to remove them all and keep them safe!!!! 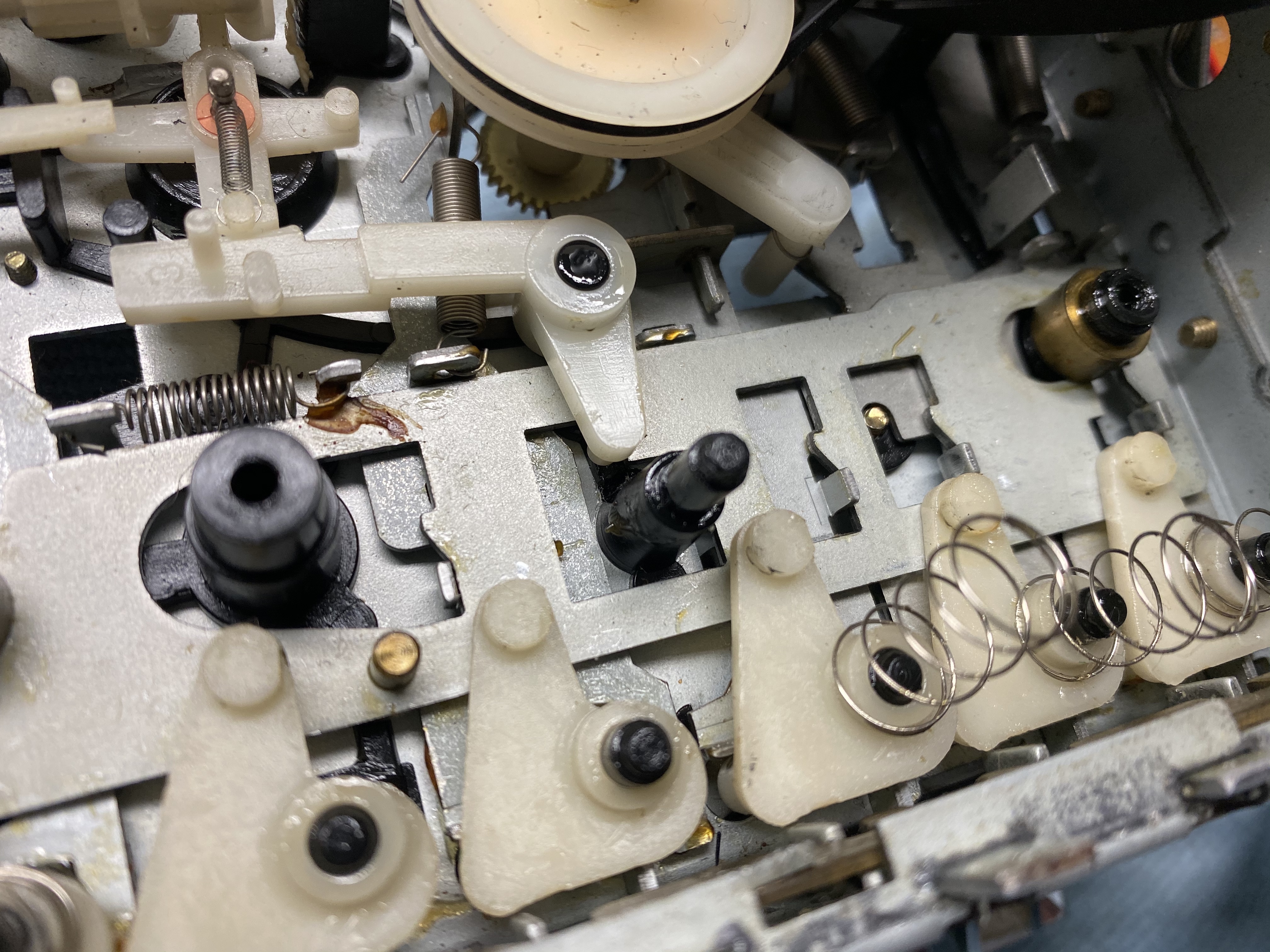 6. With springs removed, the triangular shaped pieces across the bottom simply lift off to be removed. 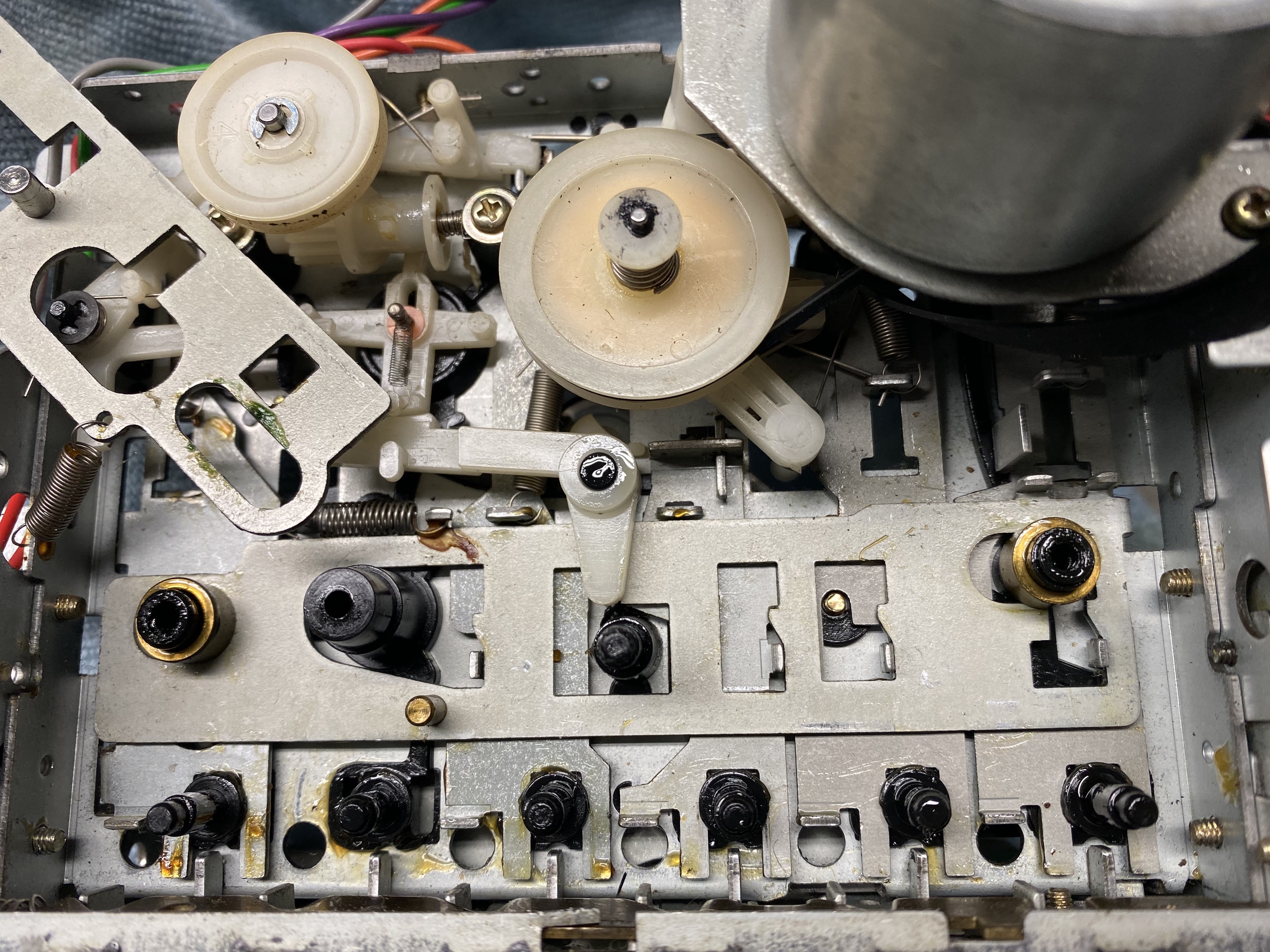 7. Lift off this white lever. 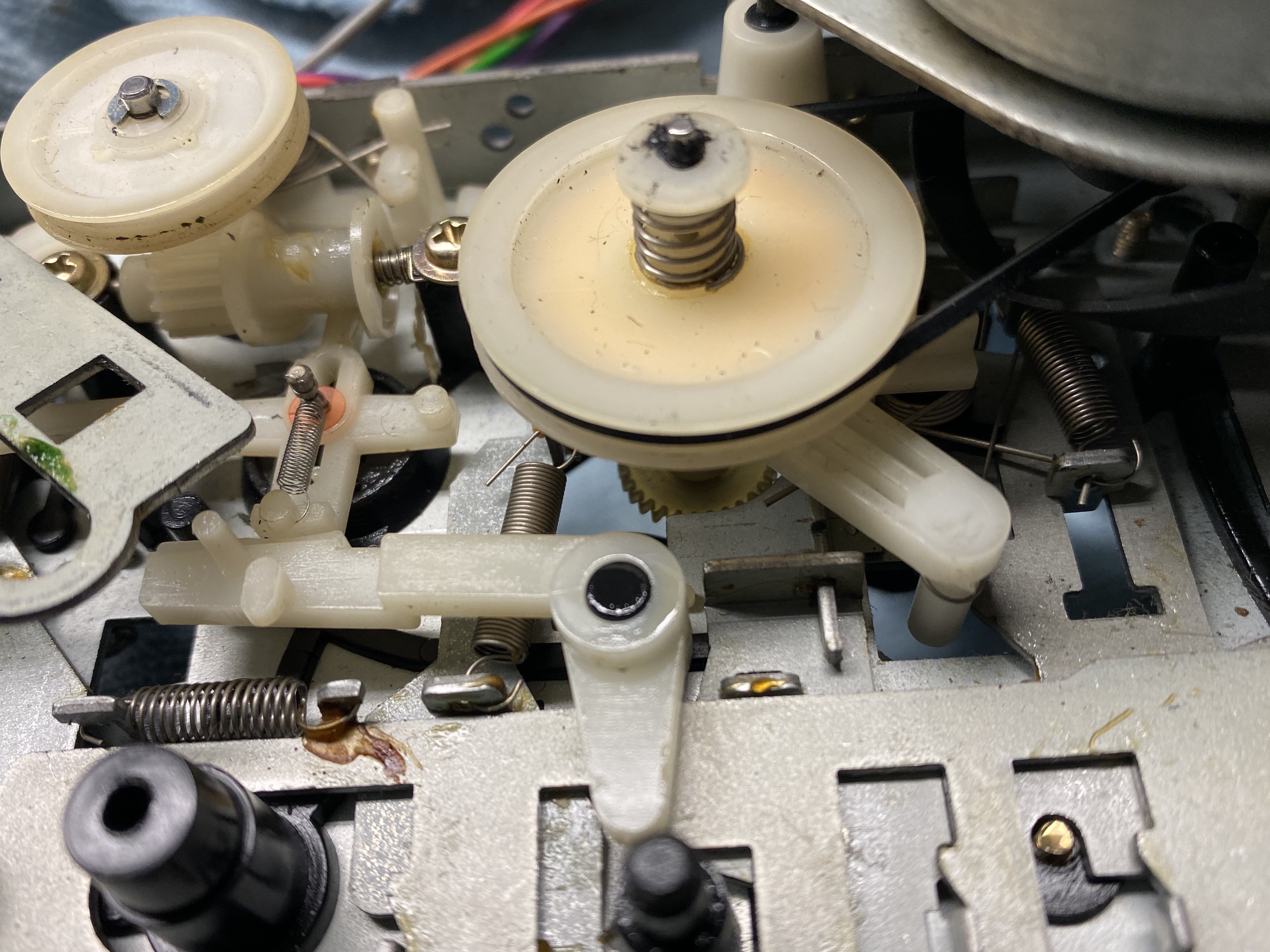 8. Undo this spring which is keeping the plate in place. 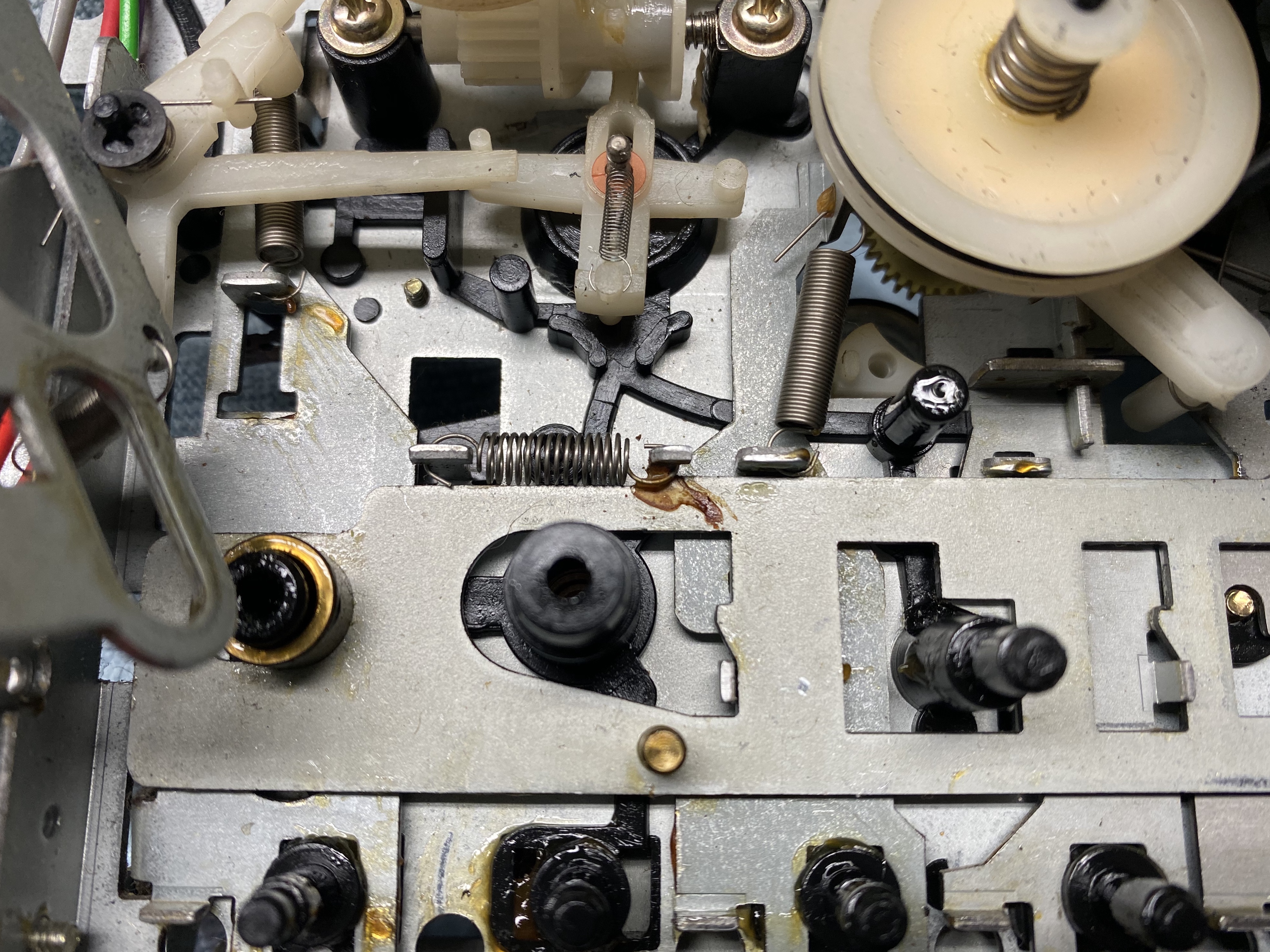 9. With the last plate removed, you can see the pivot post quite well and identify any cracks or splits. 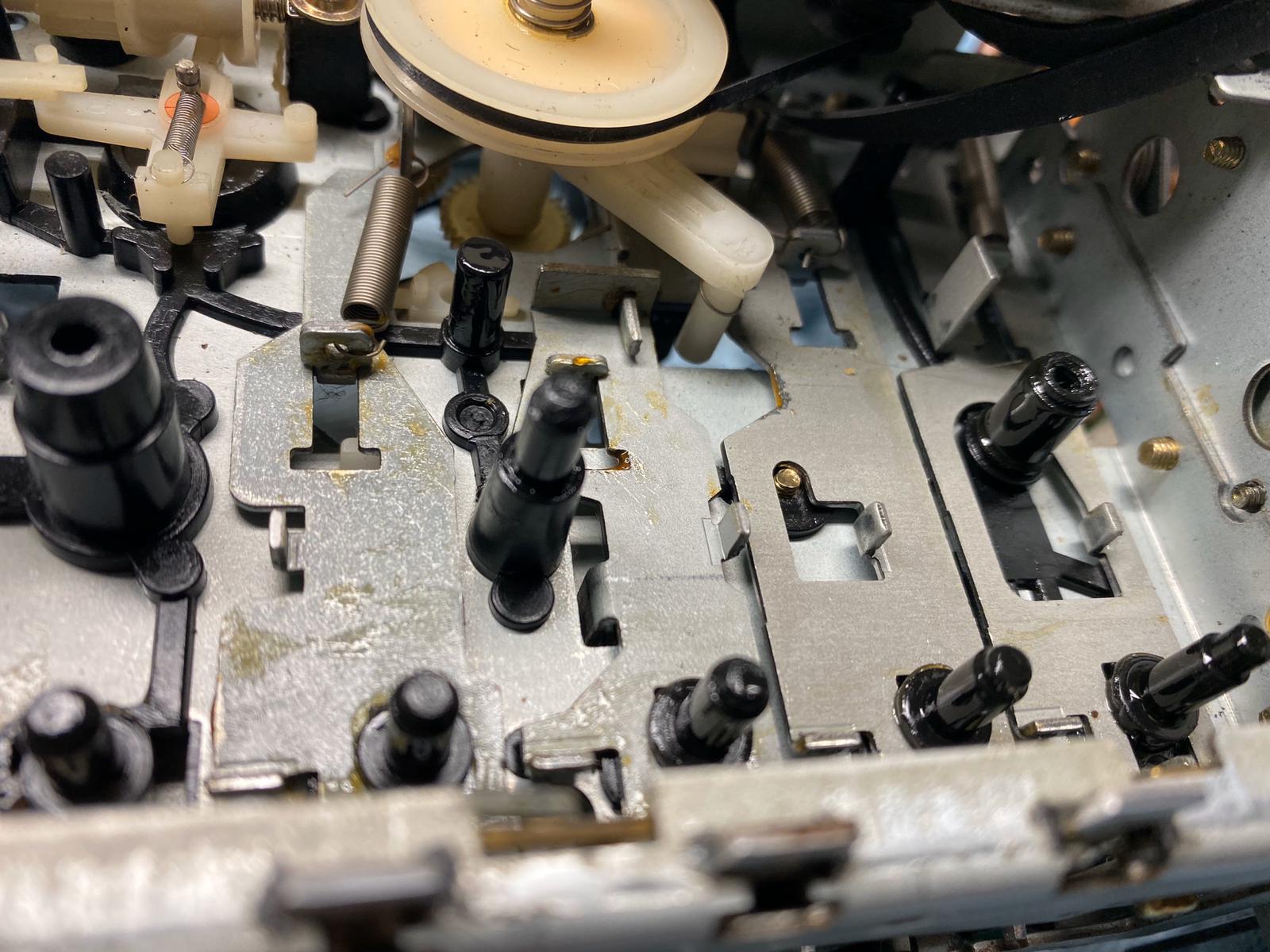 10. This one was split away from the rest of the plastic piece and was not completely loose but had quite a lot of movement which was affecting the gear engaging. 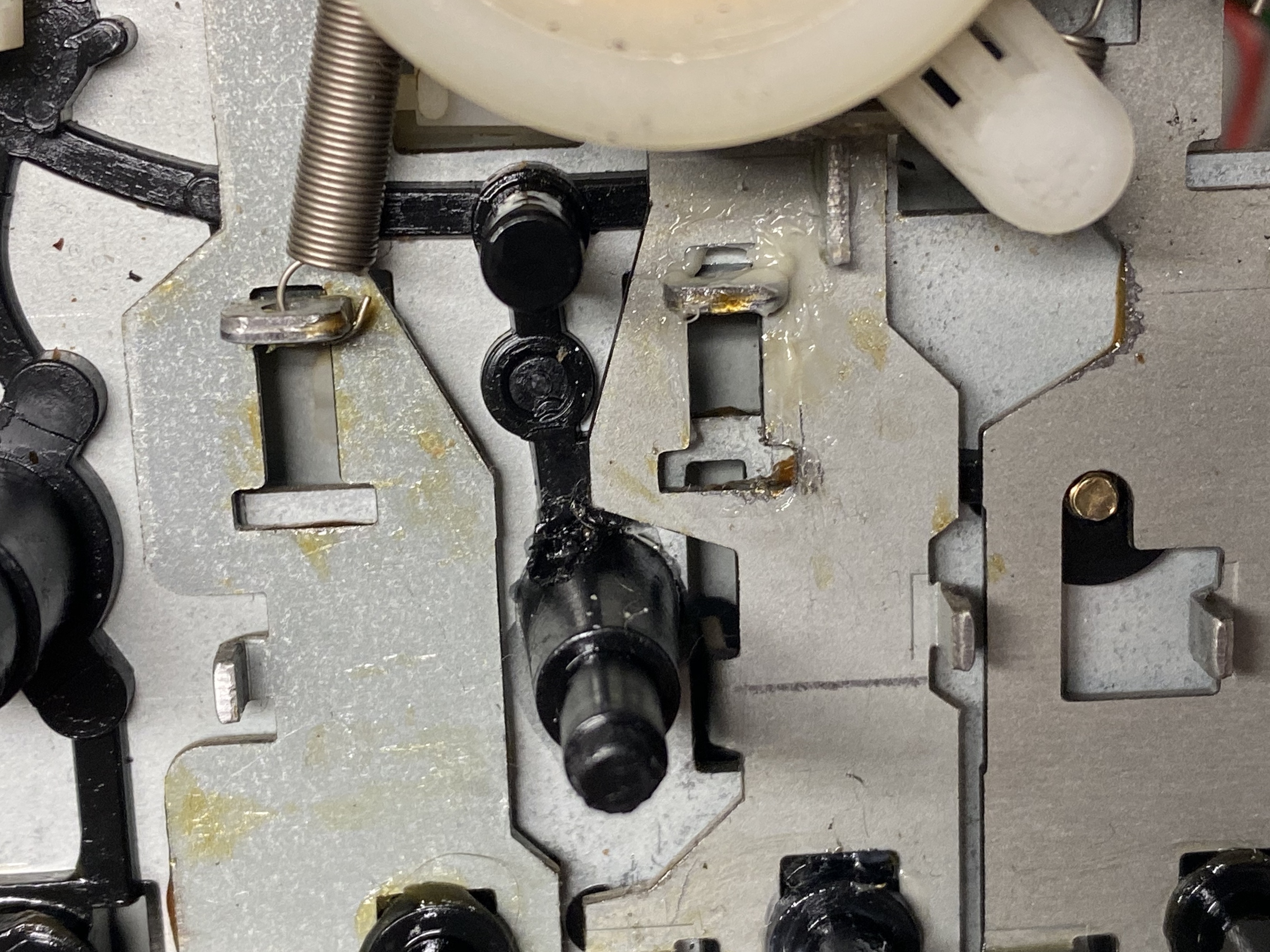 11. Phase 1 of the repair meant cleaning off excess grease etc. and applying a spot of super glue on the nearside. 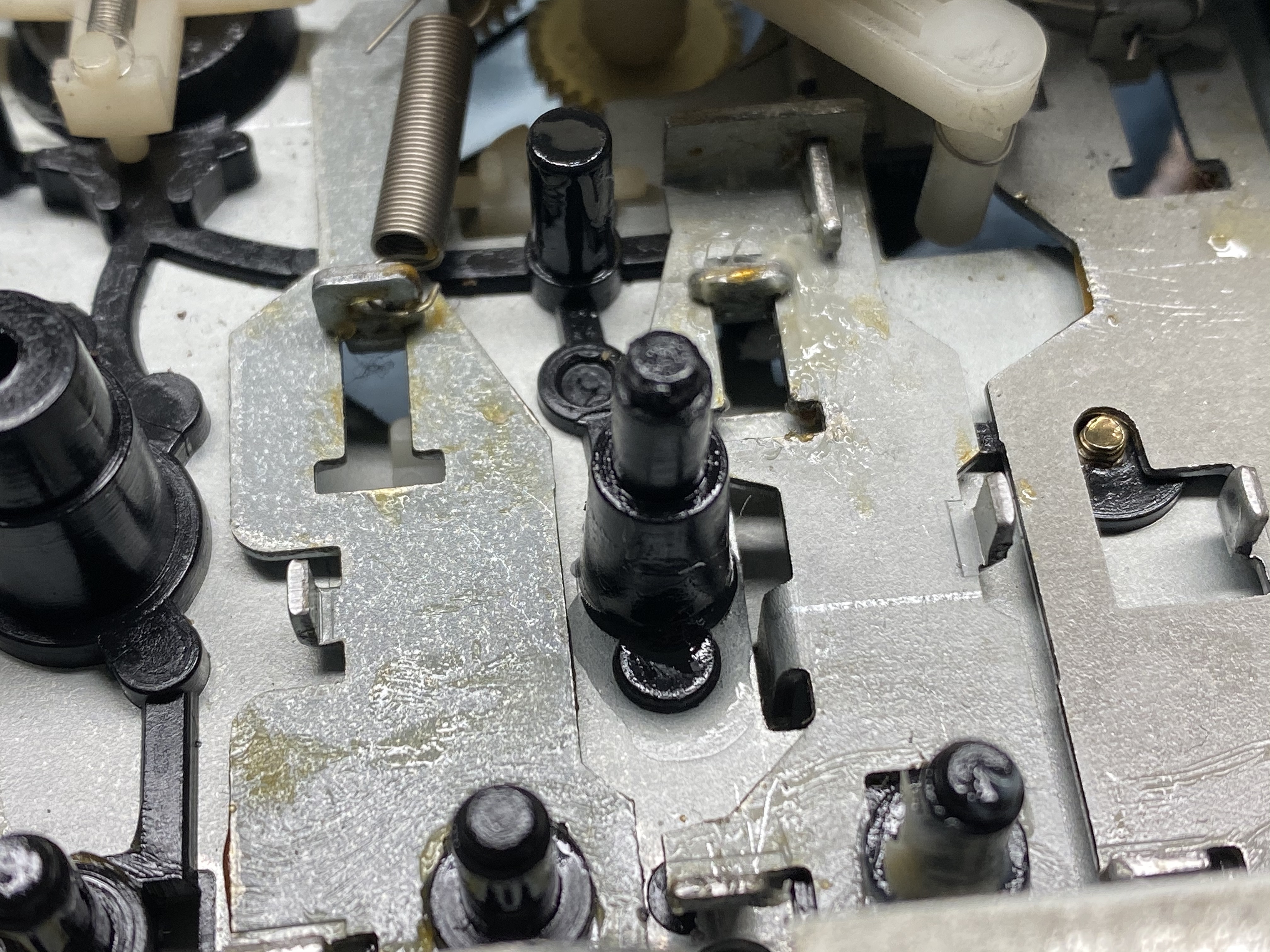 12. Phase 2 meant some of the rough plastic remaining needed to be filed and smoothed off before using what can only be described as some McGyver shitee to reinforce strength back into the pivot where the plastic had broken. 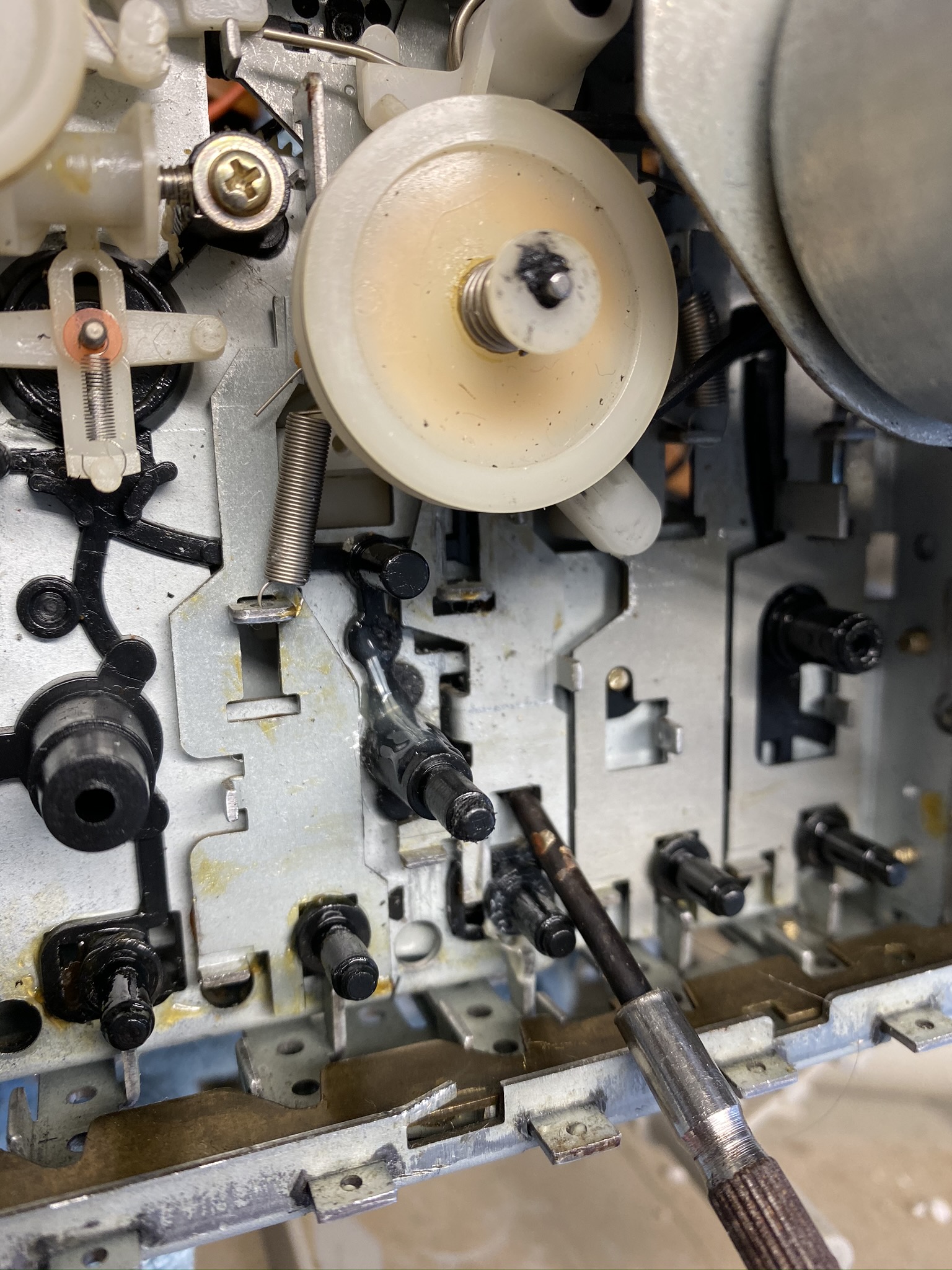 The deck is build back up in reverse order of above and should provide the pivot and gear with more strength and stability to engage as it should.

Nice work Dave, in a way this deck looks more complex than an m90 deck...the only issue i have with the repair lad is i don't trust super glue lol it was invented for war snd to stick wounds together, anyway nice work lad, please give her a good testing before sending her back nice one

The main repair in phase 2 is using a stronger epoxy glue mix which sets super strong.
This deck is a pain in the ass, it is definitely prone to issues be it dried grease or stop not working on ff/rew and only on play. Not built to last unfortunately.

do you mean autostop or just not being able to stop after rew ff???

Yep needs a tear down to bare bones, beyond me.

does  she play lad

thanks bro, i wouldn't know where to start

Thanks! I've worked on this again today and can safely say the pivot issue is resolved and the deck engages as it should 100% of the time.

Hopefully this might come in handy some time down the line for those with this unit.

I have a 970 with a non working deck. I am not brave enough to take a look inside it though.

This info and the pics are so informative. Thank you docs.

I also like the pic with the yellow sharp mini that you use for avatar.

Is this yours? if yes are willing to part with it ?

Hi deech, thanks for your comments, if your 970 is simply a belt issue you will find it very easy to change and fix.

Yes the little Sharp is indeed mine. Beautiful thing.