6 replies to this topic

Hi to you all,

a (hot) girlfriend a looong time ago used to have one of these (can not remember which model exactly) and I always found it mega cool. Surfing in the e-bay I saw one and I bought it not really knowing which model or or or. However the seller told me it was working fine and we closed the deal.

After receiving the package the situation turned out to be slightly different and on top of that the package was damaged in the mail handling so the handle is broken.

The unit fires up, and I have tested the speakers separately, but no tone comes out of the speakers. I have tried it with the tuner (which apparently does find stations as the music is shown in the spectrum analyzer) and the aux input but no tone. Not even a scratch.

The tape deck seem to have some issues also, but this is a later problem as that is not my main focus anyway. The unit will later, if I get it to work, run with some source attached to the AUX.

I just want to see if I can get it to work at all. I downloaded the service manuals from hifiengine but sadly i am not very good with this extreme electronics. I normally fix around with old bmw cars so I have no issues with mechanics but this does not really help me here.

I have a multimeter and test-lamp and such stuff but it would be great if there is some trouble-shooting list or such which I could follow.

- AUX input: Tested and when attaching a phone with a chinc cable playing "My Doorbell" with The White Stripes I can clearly see the very intro in the spectrum analyzer.

My next idea was to take (first the TA-118) it apart and to check if there is any visual damage to the board(s) in the amp. The amp should run with an AUX source without the ST-118 Tuner or TC-118 Cassette part I assume.

Apart from the broken handle, there are other things regarding the visual of the unit (the guy who had the FH-11 earlier should be tied on a rope naked and dragged through town by a wild horse) but that is a later story. I want to make it work first.

Note: If I am not able to fix it myself I will try to get someone else who can to do it for me.

Thankful for any help or ideas

About me; I am a Swedish guy living in Germany since many years. I am mainly into older cars (focus BMW) but I happen to think Boomboxes are quite cool as well. Nothing wrong with that I hope

Hi, i would start at the power amp section (ic 601) to take some voltage checks. There is a muting function in that ic too which has a fusible resistor, a typical component which fails to protect the circuit.
Download ta-158 schematic and get inside that so you can power it while undertaking some voltage checks.

Welcome aboard, Peter!  I was thinking along similar lines with docs regarding the muting function.  Maybe it is "stuck".  Another thing to try... plug some headphones in the headphone jack and see if you get any sound there.

Hi, thanks for your replies. I just tested it with headphones without success. But then..

@ docs: thanks for the input. I checked the (it is a ta-118) service manual for the amp and found the power amp section (ic 601) in the mounting diagram and on the schematic diagram. Then I went to open the "hood". Well... it turned out to be even easier than I thought. A cable was loose for some reason. These things does not just pop off do they?? 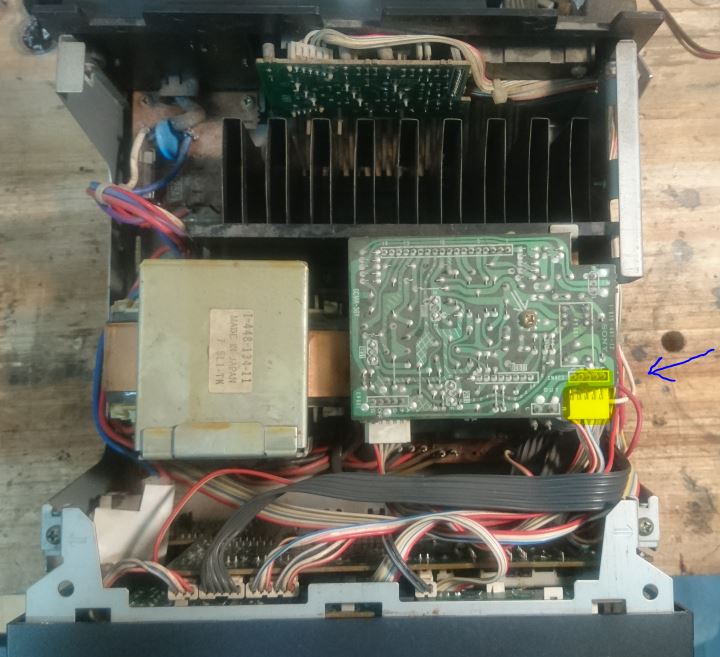 Anyhow, I plugged it in again and fired up the unit and it seems to work. As it (as I guess) have not been used for a while the contact in the different slide-switches

(volume and equalizer etc.) seems to be a bit "crispy". Any good idea on how to clean those and make them happy again?

It works quite fine with the radio but when connecting my phone there seem to be some serious contact issues. I am not sure if this is due to a bad connection cable so I have ordered a new one. I will get back to you on this when the new cable is there. That will be first in one week as I will be away for almost a week.

Thanks so far to both of you for the support even if the error was something else.

If everything is fine I will start with some half-serious renovation of the unit so that it can be used again in public without me being ashamed for the bad condition.

First question in that direction: Does anyone have exactly the FH-11? Or maybe just the APM-158 boxes? I have a badge issue due to bad handling from the previous owner. I need high resolution photos of the front badges of the speakers. "Sony 3 Way Super Wide....". I will explain why a bit more in detail later. The reason is once again due to the super dude who had the FH-11 before me......

Glad you got it working.

The next thing to do is to use some contact cleaner on all pots, connection jacks and work them thoroughly. Make sure you also do the cassette deck "record bar". Most of the issues should be resolved by doing this.

Here in the States, the contact cleaner of choice is usually DeOxit.

Hi, after work, sickness and other stuff to do I am back with news. Today I had nothing else do to around the house (approved by the better half) I decided to get working on the FH-11. I already had a bottle of Kontakt 60 which is the common contact cleaner around here. I started with the amplifier part. I took it apart more or less completely. Cleaned the housing parts, and cleaned all electronic contacts. Put it all together again.

Did the same thing with the tuner. Then i tried to the same with the tape-part but that was a bit more complicated. Has anyone taken this piece (TC-118) apart?  If someone did, then how the heck did you get the tape inlet door off? There is no problem getting the two hooks off but then there are these two "hinges".... I do not want to break the plastic.

Put everything together again and the thing works like charm (i haven't tried the tape part yet). It is amazing how good the sound is. I remember i was amazed by it back then and It still amazes me a bit today.

How cool is that. The thing works again and the sound is just great. I now only have two open points. The idiot who had the unit before me decided at some point (i can see no other sane reason) that SONY was a bad company even though he (or she) still thought that the sound was great. Therefore the stupid decision was taken to cover up the branding with some soft paint. I managed to get it off without problems on the main unit but on the loudspeakers the print on the badges does not withstand alcohol, which is needed to get this black color off. Therefore i have only made it on one. I have no idea what to do with the second one.

Secondly the packaging as the unit was sent to me was so bad that the handle was broken. That means that i cannot complete it and the unit does also not "stick together" as the handle is the locking which keeps the loudspeakers to the main unit. 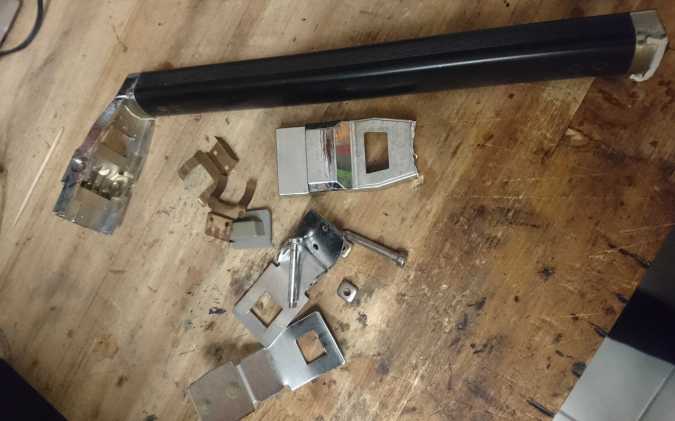 1. does anyone have a spare handle? I only need the plastik chrome side parts as they are the ones which are broken. Or a complete handle. Or maybe does anyone know someone who can 3D printer wise produce two new parts? One of the sides is so ok that it could be used as the model for a new one.

2. As i already wrote above. Does anyone have a couple of APM-158 speakers and can shoot me some good fotos of the badges so that I can get the badges printed in some way to put them on. It looks really bad without the badges.

Thanks for replying to my earlier posts and for the ideas on how to solve it.

Also tagged with one or more of these keywords: Sony, FH-11