7 replies to this topic

Anyone who has one of these for sale and want to part with it can contact me.

Not too many Pioneers in my collection and  i d really love to have one.

No one? Is this unit that rare?

I have one but it’s very rough.works but yes rough deck isn’t engaging head,tries to, and missing cassette door. I think there’s one on the bay but I think it’s US.

one just sold on our Ebay £200, the seller claimed it was fully working and re belted but i have heard that before

They really pound,very powerful with great sound but somewhat complicated deck,servo logic I think.
I wish I had a nice one or 757 myself.
Bobby has a wicjed 757.,not for sale I don’t think.

BTT:  I have a brand new, in the box SK-757f.  I'm waiting on my last shop manual to arrive from Germany and then I need to open it up and change out all the capacitors.  I've been buying parts (main manual, new belts, speaker surrounds and domes, etc.) over the past few years.  I've had a couple of synthesizer and car projects that have been keeping me busy in the meantime.

Use didn't kill the Pioneer, but the years almost did.  It is literally brand new, and not thinking clearly, I plugged it in once and saw some capacitor fluid drip from below the right speaker.  That was enough for me.  I packed it back up, closed the box, started buying parts for it and haven't had it out of the box since.  I ended up paying about $500 for the unit back in 2014 when a few of them became available on Ebay as a "barnyard find."  Compared with the $200 the original unit cost when purchased at Subic Bay back in 1982, I didn't think it was that bad of a deal.  Recently, I've seen these stereos go as high as $2500 for NIB, but to be honest, I can't imagine why anyone would pay that much for one of these.  This will be a labor of love project since I got one for Christmas back in 1982 as my first "real" stereo.  Ever since it gave up the ghost 10 years later, I've been pining for another one.

I'm probably going to start working on this over the summer and will put up a progress thread.

Good luck with your search. This is one of my favorite boxes and an often 'go to' box 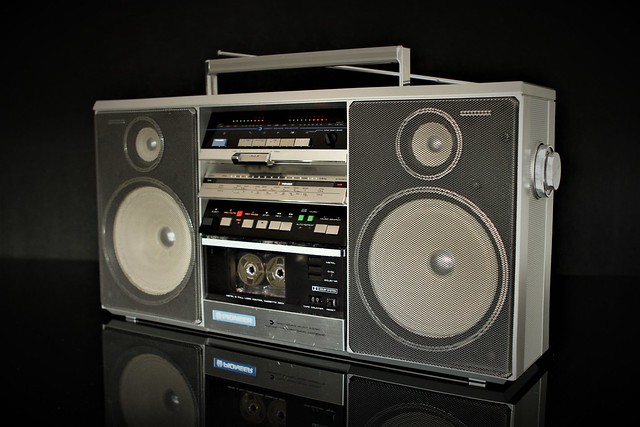 Great Story Zakmartin . If this was my first radio i would probably tried and fix it as fast as i could.

Thanks for wishing me luck  DBZerk ! I m still looking for one .

Back to Boomboxes & Parts Wanted
Reply to quoted posts     Clear