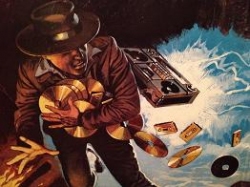 
3 replies to this topic

I have a pretty BomBeat RT-S85 from Japan. I decided to see if I could run it on 240V using a transformer from a Pioneer which delivers the same 13.5V that toshibas such as this (all the RT-S8xxx series appear to be the same box with slightly differing looks and decks) run on.
So I gave up fiddling about with it as popped some batteries in for a test run. Hey ho - everything working, functionally and mechanically - except no sound at all. I put headphones in and I can hear the static pop as they are inserted into the jack as normal. If I turn the volume up all the way I can hear the radio very faintly - but interestingly not whilst it is switched to radio mode; just when it's switched to Line mode or a tape is playing.
Line out works as it should, using another box to test it out.
I haven't taken out the main circuit board yet, but inspection doesn't reveal any cracks so far.
I just wanted to know where I should begin looking?
All the controls have been cleaned out and lubricated with Servisol.
It's a very pretty unit, and I haven't seen another S85 since. Although they're basically all the same unit, this one seems like anorexic scarce design.
Thanks for any help.

It's your line in/tape/radio select switch, corrosion. Japanese boxes are famous for it, mine did exactly the same thing. Best get the cover off and pay attention to this switch.

Lots of de-ox and lots of toggling will fix it.

Mine is the S83, but like you say pretty much alike inside.

That's what I've been up to

But it's gotten me no-where so far. The best I've had is a sudden lick of sound when I flick it from power: off to either radio or line in, whereon I will hear the selected feature for a split second before it fades off to near-nothing again. You're right about japanese boxes doing that though, I've had a few which wanted a fiddle.

yep, that sudden burst of sound is what twigged me to the issue. Mine occasionally still does it actually, but most of the time behaves itself.

Back to Toshiba
Reply to quoted posts     Clear