For those that have m90 and maybe on there wishlist


69 replies to this topic

Hilarious! No way I would sacrifice a Panasonic RX-5050 to save any M90.

Oh boy,I wonder what our Panasonic Super fan Superduper will have
to say about this scavaging!!!!

Great news for you guys with bad pots on M-90's! Glad mind is fine!!

With enough pot, any pot will work fine...

You know that people who haven't got the money for high end boxes will be cringing right now, knowing that cheaper boxes they would go for, are being parted out to fix more expensive boxes.

all joking aside, I think these go a little cheaper than a RC-M90 seriously 52 buck's and 22 buck's to ship UPS pretty cheap for a part that's been discontinued for 8 year's. but I'll prob keep the Pani and try to find another and build 1 out of two.I was gonna buy the fellow's on here but the shipping was a little pricey, Not sure why. Maybe It's where he Is located. 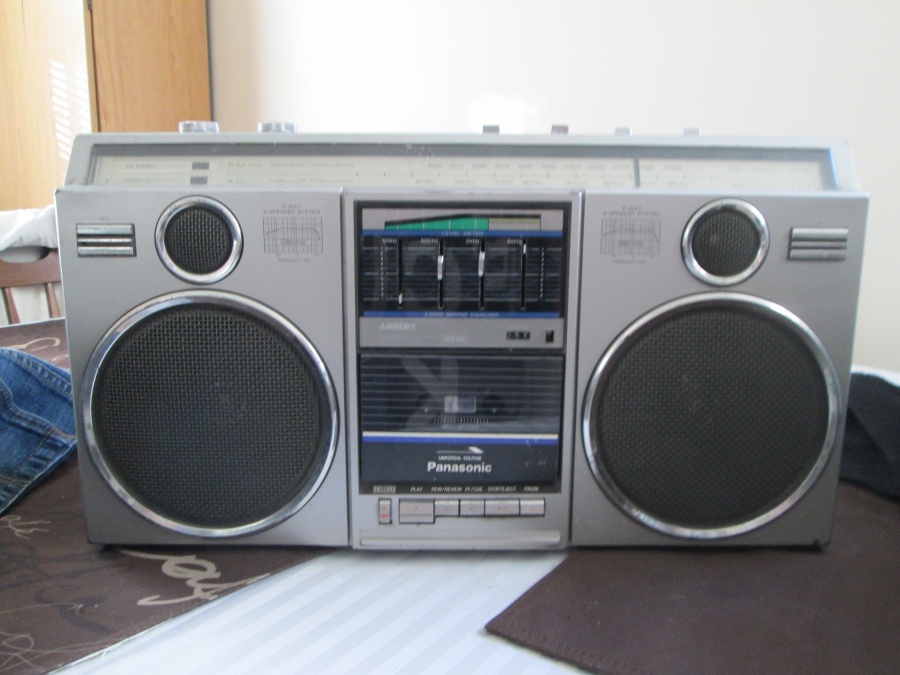 It's funny here....scraping an old school 1980's silver boombox to save a suitcase m90, but 10 years ago most of us hated the early 90's eggs .....and now it seems they are getting more respect compared to what's out now.....which is junk or trying the retro 80's look with iPod docks and MP3 players and some of us here think they are the cats meow. Crazy mixed up world we live in. Just saying.

It's funny here....scraping an old school 1980's silver boombox to save a suitcase m90, but 10 years ago most of us hated the early 90's eggs .....and now it seems they are getting more respect compared to what's out now.....which is junk or trying the retro 80's look with iPod docks and MP3 players and some of us here think they are the cats meow. Crazy mixed up world we live in. Just saying.

I listened to the 5050 this morning with a Tape and the radio, I'm sorry but compared to the 90 It wasn't a hard decision. I love my 90 It's loud and I'm proud Lol. I will be keeping the 5050 however because the tapedeck did work fine, I'll find another and put them together.

Yeah I bought that one as well ,the first one I got the tape deck work's fine so I'll make one out of two. Tk's Blu!

Update on volume pot replacement, were thinking that the volume knob will NOT be at the right spot so the notch will appear as though the volume Is working backward's. Funny I saw an M90 on ebay awhile back and It said In the description the volume worked backward's.

Cone surface to under the umm paper Is 5 and a half inch's basket's are 6 and a quarter.

Looks like I am buying up all the RX -5050s . All the technical brainiacs that can rebuild pots, use your wealth of knowledge to help save your precious m90s.

Message from my Tech! WOOOOOHOOO FINALLY !!!! Volume Works PERFECTLY !!!
Just gonna take my time and button her back up, nice and neat!
This Is a very very very good sign! Yaaaayyyyyyyy

I'll keep ya posted, I don't have It back In my posession yet ,but looks like It.

It does work but It seem's Ive lost my balance function although It seem's as though It's centered. Also the notch In the volume knob now start's at 6 and goes down around past full ,I'll keep you posted on how It work's, I only have the radio right now, but I'm gonna get my first tech to look at the deck as he repaired It In the first place when It didn't work.

Ok, that makes sense. The D shaft on the 5050 potentiometer is in a different position than the M90 pot. Also, the 5050 doesn't have a L/R balance feature to its volume knob decreases resistance evenly on both sides built in.

Ok, that makes sense. The D shaft on the 5050 potentiometer is in a different position than the M90 pot. Also, the 5050 doesn't have a L/R balance feature to its volume knob decreases resistance evenly on both sides built in.

So as far as the balance goes ,what does that mean exactly Blu? Lol sorry ,you lost me at Hello. Lol.

I would like an update on this if possible. Has anyone else performed this pot switch on here? I found a great deal on a RX-5050 for a parts box as a plan B for my M90 repair. My plan is to use this volume pot should the tech call and inform me that a new aftermarket replacement is not a possibility nor NOS or used (that he can find). I would then have him remove the original Pot so I could modify the D shaft of the RX-5050 pot so the original volume knob reads correctly.

I have a few questions on this pot swap.

1: No mention was made on this post about the Loudness switch not working after the switch. Anyone know?
2: Also I really would like to know if the box will play in TRUE stereo with the RX-5050 pot. Best test of this is to only plug into one of the auxiliary inputs on the back and verify that the sound only comes out on that one side. The reason this is of concern to me is because 347 Tony has indicated that the balance control becomes inoperative after this swap. Which leads me to my next question
3: Does that mean that the knob does absolutely nothing when turned or works more like a fader (light then loud sound?) Is the box actually playing in stereo or does it just appear that its playing in stereo.

What I've learned about the M90 is you can't go by the VU meters as they are representing input signal to the amp, not output to the speakers. With my failed volume pot you could plug into the left aux input and only the left VU meter would swing but sound came out over both speakers (same for switching to the right channel).

Answers to these questions by someone who has done this or knows for sure will help me greatly if this ends up being the way I have to go to get the volume working correctly again.

PM cplchronic, his M90 chassis might have a good volume knob you can swap over!

PM cplchronic, his M90 chassis might have a good volume knob you can swap over!

I appreciate that blu

Thanks a lot. I shot him a PM. This would be a really nice finishing touch to restore my M90 to perfect working order. I already have a RX-5050 coming just in case but the original pot would be so sweet to have

I've been looking into this some more trying to come up to speed on what might work.

I found it interesting that Joe's volume changed behavior at 3/8 volume. That's 37.5%, or 40%, which is a common loudness tap point. Perhaps something wore down too far on the track there. The tap is an exposed copper pad under the track, and this creates a disruption in the planarity of the track. Sort of like a road bump. And the two side of it could become worn over time from the wiper there. I'm not certain yet where the tap is on the M90 pot, but my guess without looking would be 40%.  And, since it's linear, it should be just a bit left of center.

Two pots look promising, one of which is actually pot-compatible stepped attenuator with s-curve contacts for smooth transitions. One possible advantage with this one is if the tap isn't in the right spot as the original M90 pot, it might be possible to disassemble it and move the tap wire. A cheaper alternative may be one of the faux-Alps pots from China, which I hear are also stepped and work okay, but may not be close enough physically.

There are guys that have added the tap themselves, and I think this may help cross the bridge between trying to find one that fits, but also has all of the right stuff going on inside.

I'm not sure it would be necessary to run a conductive trace around the edge to the terminal area instead of just exiting out the back case with the wire right at the tap point, if you use a very thin strand of wire and a careful application of conductive cement right along the very outer edge of the track. It doesn't need to be a beefy wire since this is a high-resistance, pre-amp circuit. Sort of like what this guy did.

I purchased a pair from the first link after reading consistently good feedback from those that have put them through their paces, even saying they are superior to a conventional pot, so I'm hopeful.

I purchased a pair from the first link after reading consistently good feedback from those that have put them through their paces, even saying they are superior to a conventional pot, so I'm hopeful.

Thanks Caution. I am eager to hear what you find out

Buuuuuump
If all goes well tonight after I solder/glue it down, I should have a replacement solution. Turns out the ones I bought last year (still for sale) are nearly a perfect match - correct shaft length/diameter, resistance, shaft height when mounted, has loudness taps, and although a bit deeper than the original, it (just barely) doesn't hit any parts behind it. The only two negatives are that I had to file down for a D shaft and had to make my own retention bracket, which although I scavenged and modified mine from another right-angle pot, it could be done any number of ways.

During a reassembly test I discovered I crossed a couple of the wires so I need to fix that, but it did work enough that I could control the volume and switch loudness on and off. There are noticeable changes in volume due to it being a stepped attenuator rather than an actual pot with a carbon track, but it feels very solid. Once I fix the wires I'll glue the base to the PCB and the clamp going over the top.

The seventh pin needed a new hole as it was partially blocked by the pot when in the correct position. 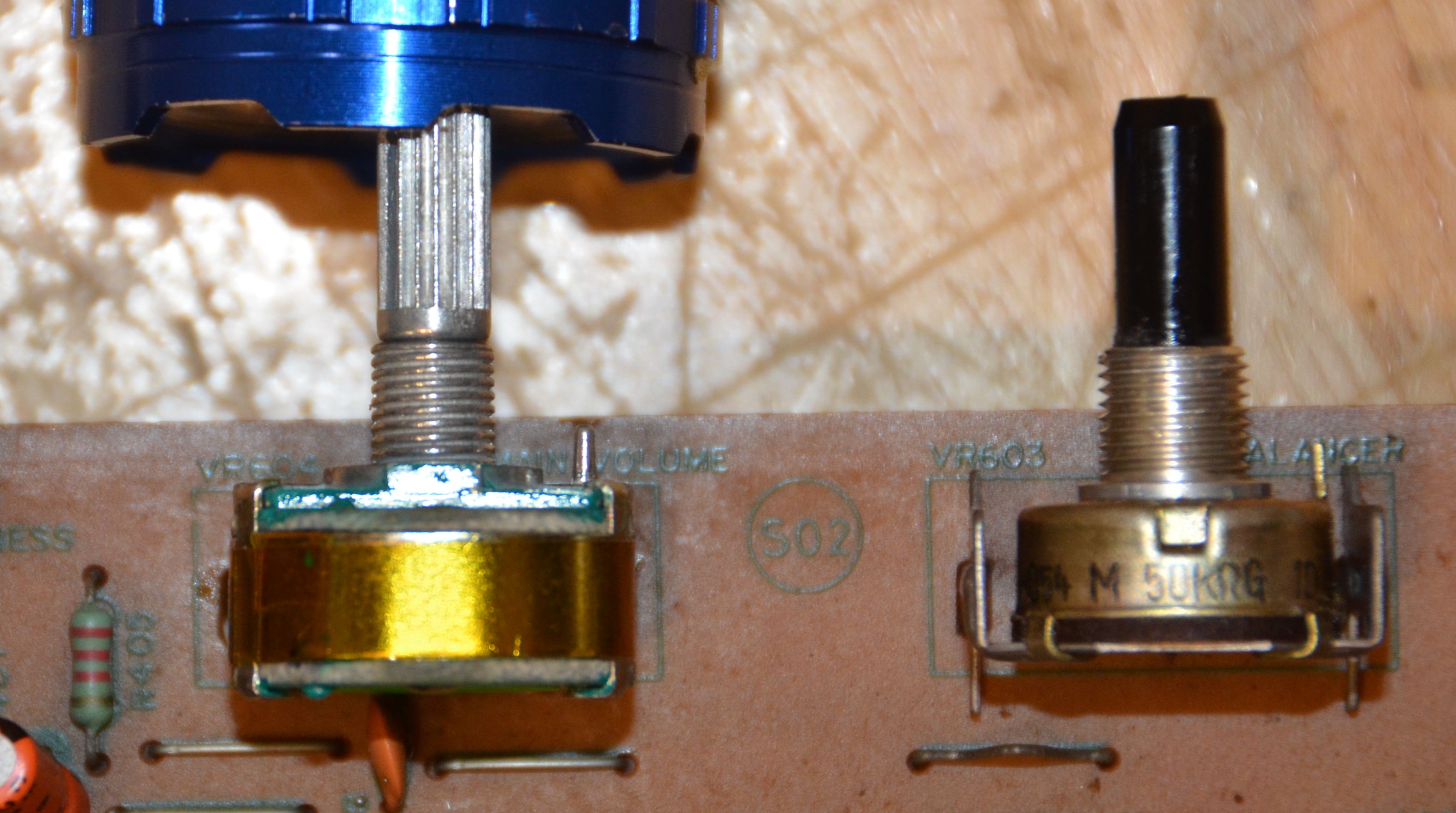 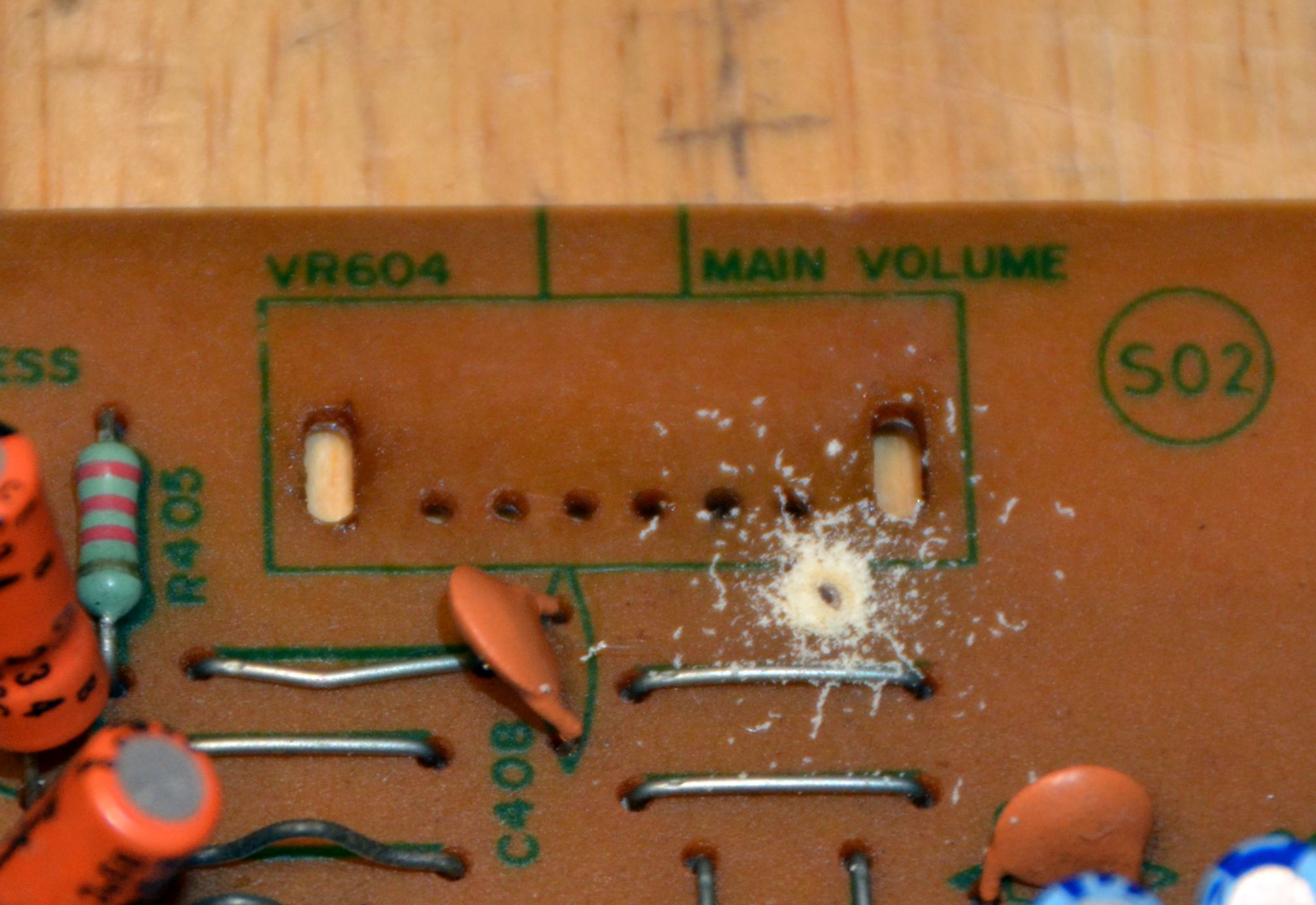 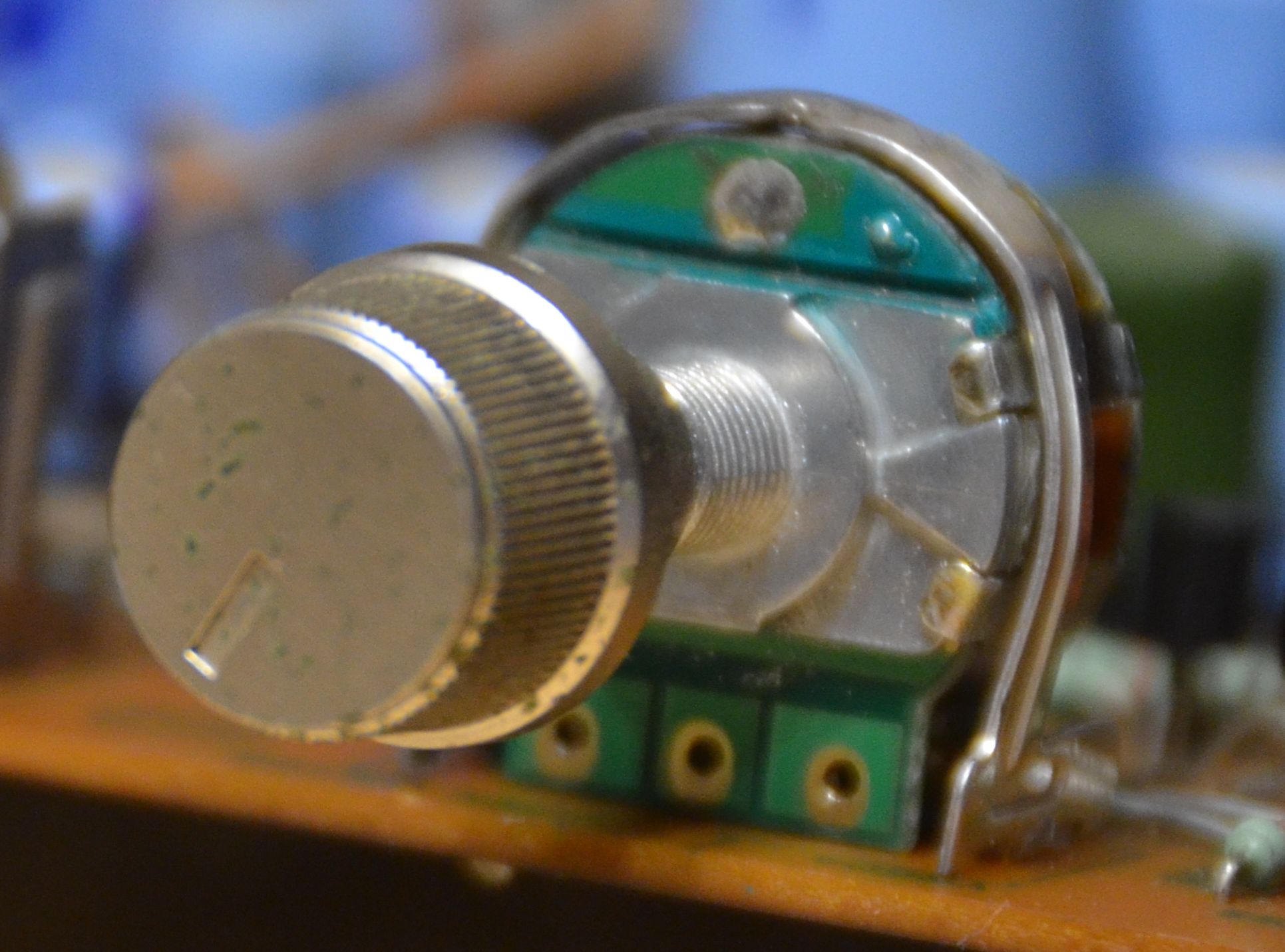 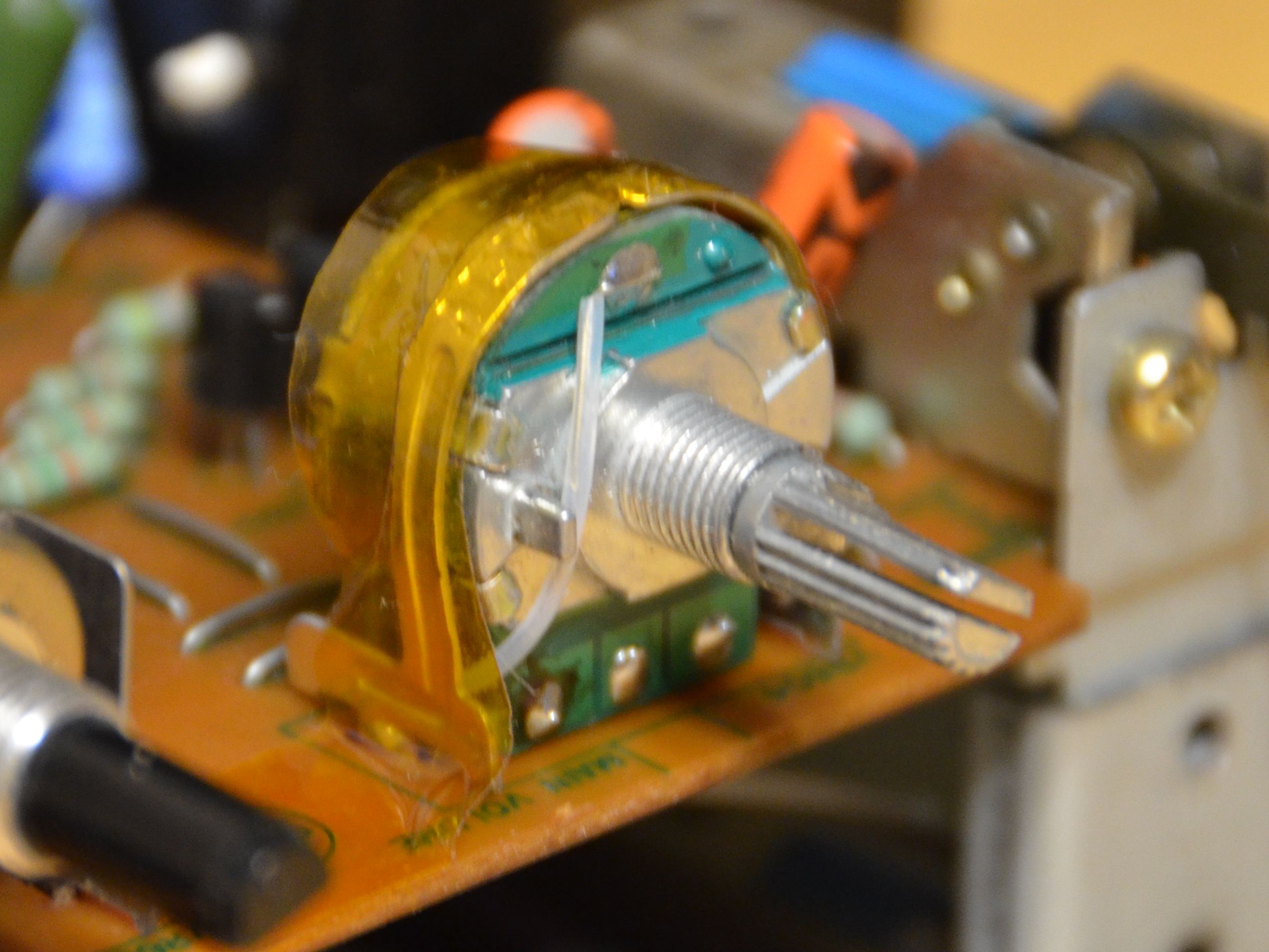 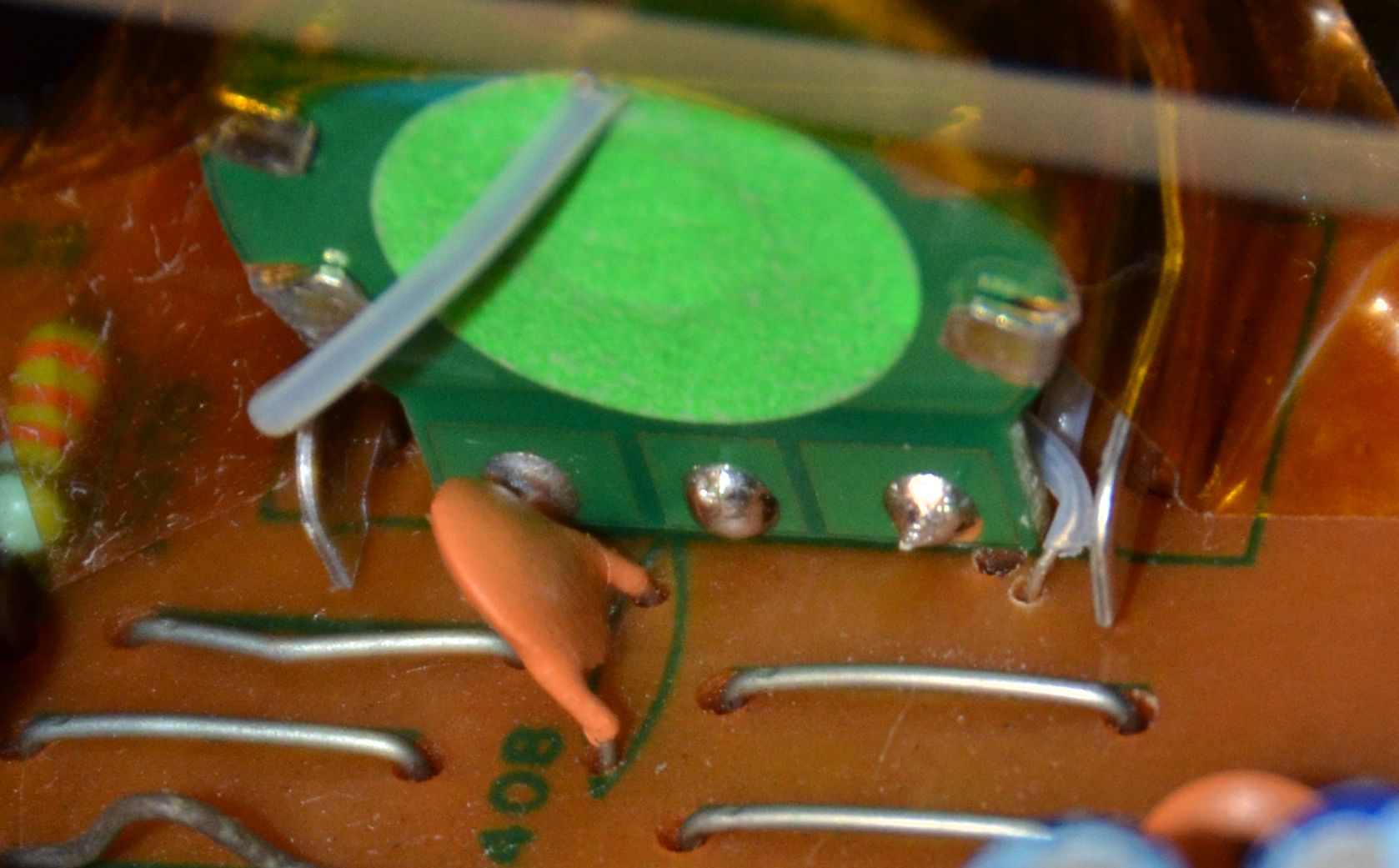